TCP is a connection oriented protocol and offers end-to-end packet delivery. It acts as back bone for connection.It exhibits the following key features:

TCP offers following services to the processes at the application layer:

The Transmission Control Protocol (TCP), at transport layer groups the bytes into a packet. This packet is called segment. Before transmission of these packets, these segments are encapsulated into an IP datagram.

Transmitting the data in duplex mode means flow of data in both the directions at the same time.

Internet Protocol is connectionless and unreliable protocol. It ensures no guarantee of successfully transmission of data.

In order to make it reliable, it must be paired with reliable protocol such as TCP at the transport layer.

Internet protocol transmits the data in form of a datagram as shown in the following diagram: 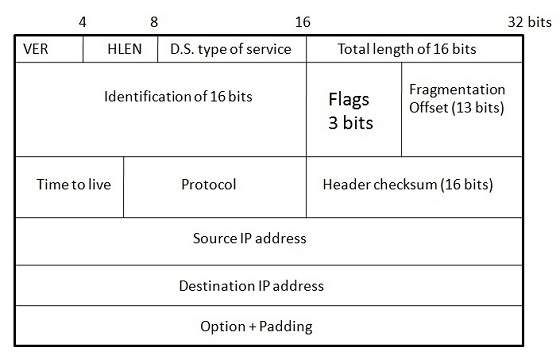 UDP transmits the data in form of a datagram. The UDP datagram consists of five parts as shown in the following diagram:

FTP is used to copy files from one host to another. FTP offers the mechanism for the same in following manner:

Trivial File Transfer Protocol is also used to transfer the files but it transfers the files without authentication. Unlike FTP, TFTP does not separate control and data information. Since there is no authentication exists, TFTP lacks in security features therefore it is not recommended to use TFTP.

Difference between FTP and TFTP

Telnet is a protocol used to log in to remote computer on the internet. There are a number of Telnet clients having user friendly user interface. The following diagram shows a person is logged in to computer A, and from there, he remote logged into computer B.