Since 1970, RDBMS is the solution for data storage and maintenance related problems. After the advent of big data, companies realized the benefit of processing big data and started opting for solutions like Hadoop.

Hadoop uses distributed file system for storing big data, and MapReduce to process it. Hadoop excels in storing and processing of huge data of various formats such as arbitrary, semi-, or even unstructured.

Hadoop can perform only batch processing, and data will be accessed only in a sequential manner. That means one has to search the entire dataset even for the simplest of jobs.

A huge dataset when processed results in another huge data set, which should also be processed sequentially. At this point, a new solution is needed to access any point of data in a single unit of time (random access).

Applications such as HBase, Cassandra, couchDB, Dynamo, and MongoDB are some of the databases that store huge amounts of data and access the data in a random manner.

HBase is a distributed column-oriented database built on top of the Hadoop file system. It is an open-source project and is horizontally scalable.

HBase is a data model that is similar to Google’s big table designed to provide quick random access to huge amounts of structured data. It leverages the fault tolerance provided by the Hadoop File System (HDFS).

It is a part of the Hadoop ecosystem that provides random real-time read/write access to data in the Hadoop File System.

One can store the data in HDFS either directly or through HBase. Data consumer reads/accesses the data in HDFS randomly using HBase. HBase sits on top of the Hadoop File System and provides read and write access. 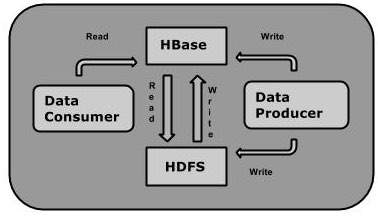 HBase is a column-oriented database and the tables in it are sorted by row. The table schema defines only column families, which are the key value pairs. A table have multiple column families and each column family can have any number of columns. Subsequent column values are stored contiguously on the disk. Each cell value of the table has a timestamp. In short, in an HBase:

Given below is an example schema of table in HBase.

Column-oriented databases are those that store data tables as sections of columns of data, rather than as rows of data. Shortly, they will have column families.

The following image shows column families in a column-oriented database:

Where to Use HBase