Grunt is a JavaScript Task Runner which can be used as a command line tool for JavaScript objects. It is a task manager written on top of NodeJS.

Grunt is a JavaScript based task runner which means it can automate repetitive tasks in a workflow and it can be used as a command line tool for JavaScript objects.

Some of the most prominent features of GruntJS are listed below −

This chapter provides a step-by-step procedure of how to install Grunt on your system.

Step 1 − We need NodeJs to run Grunt. To download NodeJs, open the link https://nodejs.org/en/,you will see a screen as shown below − 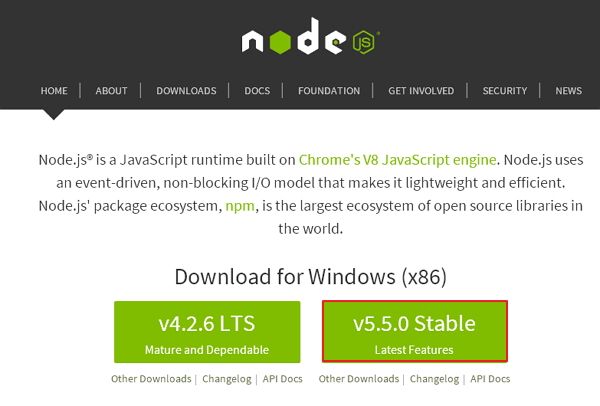 Download the Latest Features version of the zip file.

Step 2 − Next, run the setup to install the NodeJs on your computer.

Step 3 − Next, you need to set environment variables. 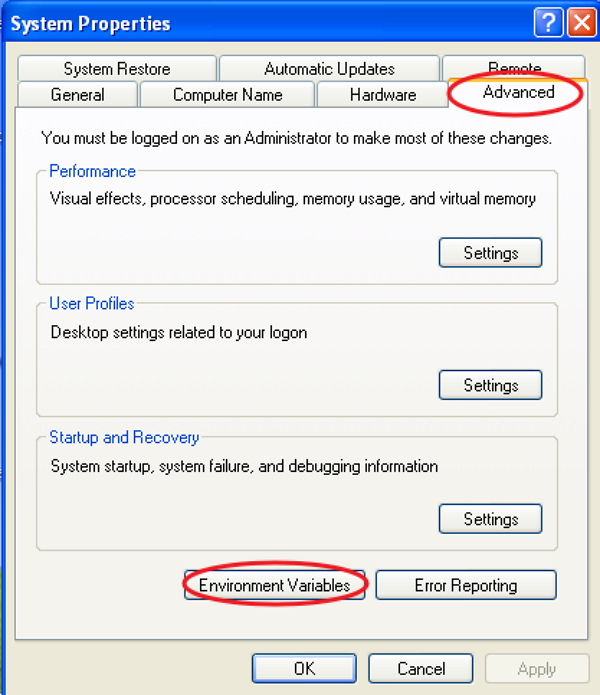 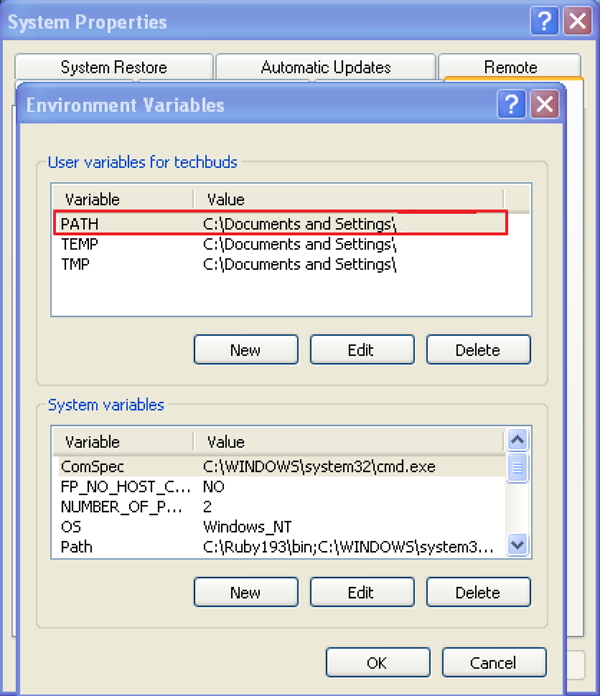 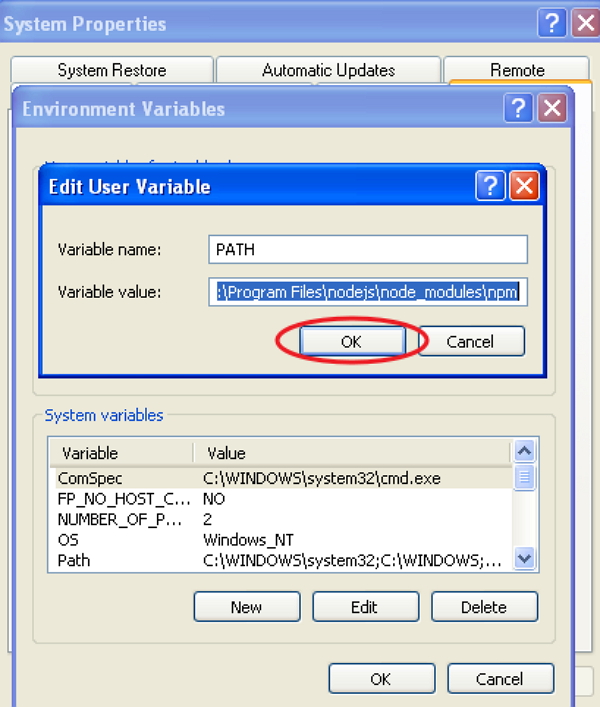 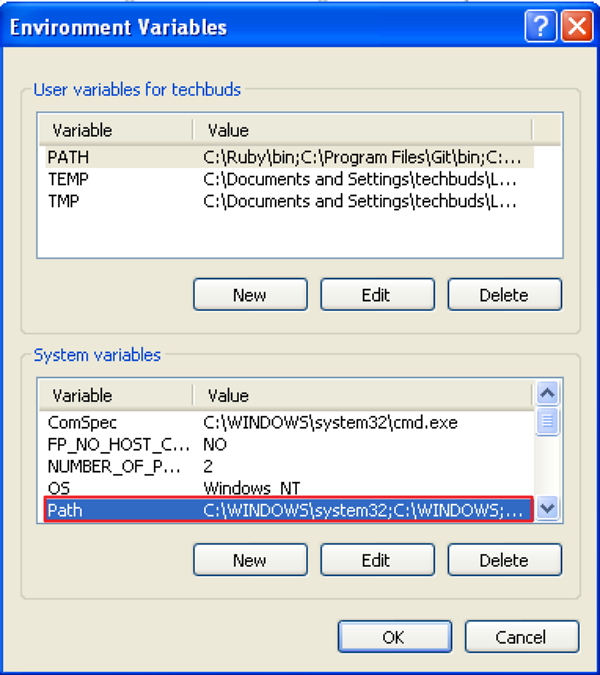 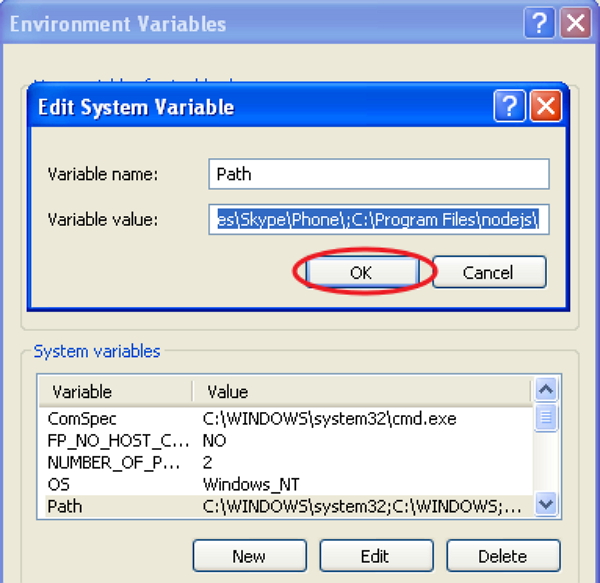 Running the above command will put the grunt command in your system path, which makes it to run from any directory.

Installing the grunt-cli does not install Grunt task runner. The role of the grunt-cli is to run the version of Grunt which has been installed next to a Gruntfile. It allows a machine to install multiple versions of Grunt simultaneously.

Step 5 − Now, we shall create configuration files in order to run Grunt.

The package.json file is placed in the root directory of the project, beside to the Gruntfile. The package.json is used to correctly run each listed dependency whenever you run the command npm install in the same folder as package.json.

TThe basic package.json can be created by typing the following command in the command prompt −

The basic package.json file will be as shown below −

You can add Grunt and gruntplugins into an existing pacakge.json file through the following command −

For instance, the following command will install latest the latest version of Grunt and adds it to your devDependencies −

To make use of Grunt, you need to have Node.js installed. The installation of Node.js has been explained in the previous chapter. You can install Grunt and Grunt plugins by using Node.js package manager.

Before setting up Grunt on system, you can update the Node package manager by using the following command −

If you are using Mac or Linux, you need to use sudo word at the beginning of the command line to grant administrator access as shown below −

CLI stands for Command Line Interface that runs the version of Grunt which has been installed. To get started with Grunt, you need to install Grunt's command line interface (CLI) globally as shown below −

Running the above command will put the grunt command in your system path, which makes it to run from any directory. You cannot install Grunt task runner by installing grunt-cli. It allows a machine to install multiple versions of Grunt simultaneously.

Working with an existing and new project

If you are working with an already configured project that includes package.json and Gruntfile, then follow the simple steps as specified below −

If you are creating a new project, then include the two files package.json and Gruntfile to your project.

The package.json file is placed in the root directory of the project, beside the Gruntfile and is used to run each listed dependency whenever you run the command npm install in the same folder.

You can create the package.jsonin different ways as listed below −

You can write specification as shown below −

You can add Grunt and gruntplugins into an existing pacakge.json file by using the following command −

Here, <module> represents the module to be installed locally. The above command will install the specified module and automatically add it to the devDependencies section.

For instance, the following command will install the latest version of Grunt and add it to your devDependencies −

The Gruntfile.js file is a default place where your configuration settings will go for Grunt. The Grunt file includes the following parts −

The basic Gruntfile.js file is as shown below −

In the above code, module.exports is a wrapper function where the entire configuration goes inside this function. It is a way of displaying configuration to the rest of application.

Load the tasks from a specified plugin by using the grunt.loadNpmTasks method. You can install the plugin locally by using npm and it must be relative to the Gruntfile. You can load the plugin with a simple command as shown below −

When you are running Grunt through command line, the Grunt will look for the default task. In the above code, we are using a task called uglify which can be run using gruntcommand. This is same as explicitly running grunt uglify command and you can specify the number of tasks in the array.

You can define project-specific configuration data for Grunt in the Gruntfile.js file.

When you are running a task, Grunt looks for the configuration under task-named property. We will define tasks with multiple configurations and target options as shown below −

Here, jshint task has myfile1 and myfile2 targets and cssmin task has myfile3 target. When you are running the grunt jshint, it will iterate over both task and target to process the specified target's configuration.

Grunt provides some ideas for specifying on which files the task should operate and uses different ways to specify the src-dest file mappings. Following are some of the additional properties which are supported by the src and dest mappings −

It specifies the src-dest file mapping per target that can be used for read-only tasks and require only src property and no dest property.

It specifies the src-dest file mapping per target in which the property name is dest file and its value is src file.

It specifies the src-dest file mapping per target by using additional properties per mapping.

The dest-as-target file format was there before the existence of the multitasks where the destination file path is name of the target. The following format is deprecated and it is not to be used in the code.

You can help the target files with a great level of detail by using the filter property. The following format cleans files only if it matches an actual file.

When you are working with individual files, you can use additional properties to build a files list dynamically. When you set the expand property to true, it will enable some of the following properties −

It is a unique JavaScript function which returns a string and you cannot use a string value for rename. In the following example, the copy task will create a backup of README.md.

You can specify the templates using <% %> delimiters. They will be expanded automatically when they are read from the config. It includes two types of properties −

You can import external data from package.json file. The grunt-contrib-uglify plugin can be used to minify the source file and it creates a banner comment using metadata. You can use grunt.file.readJSON and grunt.file.readYAML for importing JSON and YAML data.

In this chapter, let us create a simple Grunt file using the following plugins −

Install all the above plugins and follow the steps given below to create a simple Gruntfile.js −

Step 1 − You need to create a wrapper function, which encapsulates the configurations for your Grunt.

Step 2 − Initialize your configuration object as shown below −

Step 4 − Next, you can define configurations for tasks. Let us create our first task concat to concatenate all the files that are present in the src/ folder and store the concatenated .js file under the dist/ folder.

Step 5 − Now, let us create another task called uglify to minify our JavaScript.

The above task creates a file within the dist/ folder which contains the minified .js files. The <%= concat.dist.dest %> will instruct uglify to minify the file that concat task generates.

The above jshint task accepts an array of files and then an object of options. The above task will look for any coding violation in Gruntfile.js and src/**/*.js files.

Step 7 − Next, we have the watch task which looks for changes in any of the specified files and runs the tasks you specify.

Step 8 − Next, we have to load Grunt plugins which have all been installed via _npm.

Step 9 − Finally, we have to define the default task.

The default task can be run by just typing the grunt command on command line.

Here is your complete Gruntfile.js −

In this chapter, let us learn about creating tasks. Whenever you run Grunt, one or more tasks are specified to run that notifies Grunt what you would like it to do. If you specify the default task, then it will run by default.

Whenever a list of tasks is specified, one or more other tasks can be aliased by a new task. Running the alias will in turn run every specified tasks in the taskList. The taskList argument should be an array of tasks as shown below −

For instance, when you define a taskList with jshint, concat, and uglify tasks and specify the taskName as default, all the listed tasks will be run automatically if Grunt is executed without specifying any tasks.

You can also specify task arguments as shown below −

In the above task, the alias dist runs both the concat and uglify tasks.

Whenever you run multiple tasks, Grunt searches for a property of the same name in the Grunt configuration. These tasks can have multiple configurations, which will be defined using arbitrarily named targets.

When you specify both a task and target, only the specified target configuration will be processed.

The above command will run only the target foo.

When you specify only a task, then all the targets will be processed.

The above command will iterate over all the targets of concat task.

When you rename a task with grunt.task.renameTask, a property with new task name is searched in the config object by Grunt.

Whenever you run a basic task, Grunt will not search the configuration or environment. Instead it runs the task function which is specified, passes any colon-separated arguments specified in as function arguments.

In the following example, the task logs foo, testing 123 if Grunt is executed through grunt foo:testing:123 command. Whenever the task is run without arguments as grunt foo, the task will log foo, no args.

If you do not want to follow multi task structure, you can define your custom task as shown below −

You can also create asynchronous tasks as shown below −

You can create your task in such a way that, whenever any errors are logged, the tasks can fail as shown below −

Whenever a task fails, every following task will be terminated unless --force was specified.

Tasks can be dependent on other tasks for successful execution. Remember that the grunt.task.requires will not actually execute other task(s), instead it will only check to see whether it has executed and not failed.

Tasks can even fail whenever required configuration properties are not found.

Tasks can access the configuration properties as shown below −