Each Football team has 11 players and among these players, 1 is a goalkeeper. Be it the offensive or defensive team, the player’s responsibility is to score a goal for the team and stop the opposing team from scoring a goal. Following diagram shows various positions of the players on a football field. A list of player positions and their responsibilities is also provided. 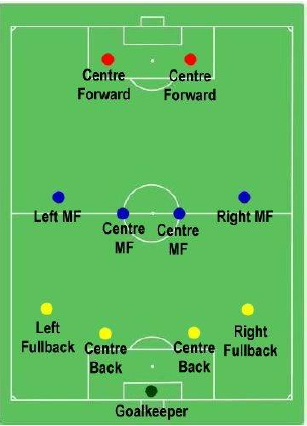 Goalkeeper − The main aim of a goalkeeper is to stop the opposing team from scoring a goal. The goalkeeper is restricted to the rectangular penalty area which is 18 yards away from the goal and he is the only player in the game who is allowed to use his hands to stop the ball.

Defenders − The defenders are positioned in front of the goalkeeper and their aim is to stop the opposing team from entering into their goal area.

Outside fullback − They play on the left and right flanks and see that the ball doesn’t pass over them. They rarely move from their positions.

Central Defenders − They are positioned in the center of the field and are supposed to cover the leading goal scorer of the opposition’s team.

Midfielders − They are the link between the defenders and attackers. They need to be fit and physically very strong than other players on the field as they are the players who run maximum time of the game all around the field. Their responsibility is to enter the opposing team’s area and see that they defend them when the opposing team retains the ball.

Forwards − Their main aim is to score goals or to create an easy situation for their teammates to score a goal.

Center Forward − The most tactful, dangerous and strong player of the game. They are also called strikers. Strikers are basically the leading goal scorers in the game.