Every web page resides inside a browser window, which can be considered as an object.

The way a document content is accessed and modified is called the Document Object Model, or DOM. The objects are organized in a hierarchy. This hierarchical structure applies to the organization of objects in a web document.

Following is a simple hierarchy of a few important objects − 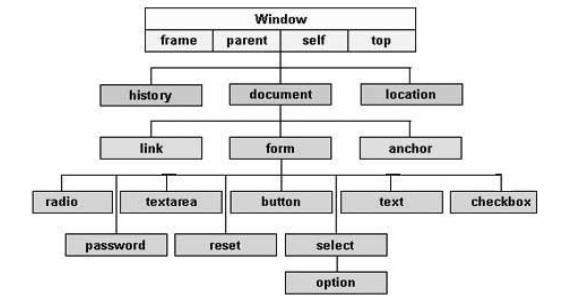 There are several DOMs in existence. The following sections explain each of these DOMs in detail and describe how you can use them to access and modify the document content.

This is the model which was introduced in the early versions of JavaScript language. It is well supported by all browsers, but allows access only to certain key portions of the documents, such as forms, form elements, and images.

This model provides several read-only properties, such as title, URL, and lastModified provide information about the document as a whole. Apart from that, there are various methods provided by this model which can be used to set and get the document property values.

Following is a list of the document properties which can be accessed using Legacy DOM.

Following is a list of methods supported by Legacy DOM.

Using the hierarchy and properties given above, we can access the first form element using document.forms[0].elements[0] and so on.

Note − This example returns the objects for forms and elements. We would have to access their values by using those object properties which are not discussed in this tutorial.