In this tutorial, we are going to define another type of resolution which is spatial resolution.

Spatial resolution states that the clarity of an image cannot be determined by the pixel resolution. The number of pixels in an image does not matter.

Spatial resolution can be defined as the

Or in other way we can define spatial resolution as the number of independent pixels values per inch.

You cannot compare these two images to see the clarity of the image. 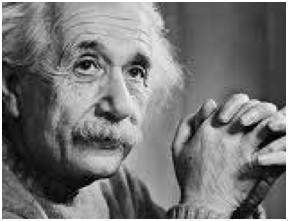 Although both images are of the same person, but that is not the condition we are judging on. The picture on the left is zoomed out picture of Einstein with dimensions of 227 x 222. Whereas the picture on the right side has the dimensions of 980 X 749 and also it is a zoomed image. We cannot compare them to see that which one is more clear. Remember the factor of zoom does not matter in this condition, the only thing that matters is that these two pictures are not equal.

So in order to measure spatial resolution , the pictures below would server the purpose. 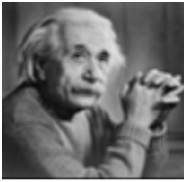 Since the spatial resolution refers to clarity, so for different devices, different measure has been made to measure it.

They are discussed in more detail in the next tutorial but just a brief introduction has been given below.

Dots per inch or DPI is usually used in monitors.

Lines per inch or LPI is usually used in laser printers.

Pixel per inch or PPI is measure for different devices such as tablets , Mobile phones e.t.c.