In the second chapter, we discussed the fundamentals of modern cryptography. We equated cryptography with a toolkit where various cryptographic techniques are considered as the basic tools. One of these tools is the Symmetric Key Encryption where the key used for encryption and decryption is the same.

In this chapter, we discuss this technique further and its applications to develop various cryptosystems.

Before proceeding further, you need to know some facts about historical cryptosystems −

These earlier cryptographic systems are also referred to as Ciphers. In general, a cipher is simply just a set of steps (an algorithm) for performing both an encryption, and the corresponding decryption.

It is a mono-alphabetic cipher wherein each letter of the plaintext is substituted by another letter to form the ciphertext. It is a simplest form of substitution cipher scheme.

This cryptosystem is generally referred to as the Shift Cipher. The concept is to replace each alphabet by another alphabet which is ‘shifted’ by some fixed number between 0 and 25.

For this type of scheme, both sender and receiver agree on a ‘secret shift number’ for shifting the alphabet. This number which is between 0 and 25 becomes the key of encryption.

The name ‘Caesar Cipher’ is occasionally used to describe the Shift Cipher when the ‘shift of three’ is used.

Caesar Cipher is not a secure cryptosystem because there are only 26 possible keys to try out. An attacker can carry out an exhaustive key search with available limited computing resources.

It is an improvement to the Caesar Cipher. Instead of shifting the alphabets by some number, this scheme uses some permutation of the letters in alphabet.

For example, A.B…..Y.Z and Z.Y……B.A are two obvious permutation of all the letters in alphabet. Permutation is nothing but a jumbled up set of alphabets.

Here is a jumbled Ciphertext alphabet, where the order of the ciphertext letters is a key.

Simple Substitution Cipher is a considerable improvement over the Caesar Cipher. The possible number of keys is large (26!) and even the modern computing systems are not yet powerful enough to comfortably launch a brute force attack to break the system. However, the Simple Substitution Cipher has a simple design and it is prone to design flaws, say choosing obvious permutation, this cryptosystem can be easily broken.

Monoalphabetic cipher is a substitution cipher in which for a given key, the cipher alphabet for each plain alphabet is fixed throughout the encryption process. For example, if ‘A’ is encrypted as ‘D’, for any number of occurrence in that plaintext, ‘A’ will always get encrypted to ‘D’.

All of the substitution ciphers we have discussed earlier in this chapter are monoalphabetic; these ciphers are highly susceptible to cryptanalysis.

Polyalphabetic Cipher is a substitution cipher in which the cipher alphabet for the plain alphabet may be different at different places during the encryption process. The next two examples, playfair and Vigenere Cipher are polyalphabetic ciphers.

In this scheme, pairs of letters are encrypted, instead of single letters as in the case of simple substitution cipher.

In playfair cipher, initially a key table is created. The key table is a 5×5 grid of alphabets that acts as the key for encrypting the plaintext. Each of the 25 alphabets must be unique and one letter of the alphabet (usually J) is omitted from the table as we need only 25 alphabets instead of 26. If the plaintext contains J, then it is replaced by I.

The sender and the receiver deicide on a particular key, say ‘tutorials’. In a key table, the first characters (going left to right) in the table is the phrase, excluding the duplicate letters. The rest of the table will be filled with the remaining letters of the alphabet, in natural order. The key table works out to be − 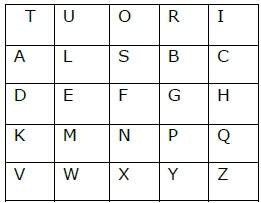 Using these rules, the result of the encryption of ‘hide money’ with the key of ‘tutorials’ would be −

Decrypting the Playfair cipher is as simple as doing the same process in reverse. Receiver has the same key and can create the same key table, and then decrypt any messages made using that key.

The Playfair cipher was used mainly to protect important, yet non-critical secrets, as it is quick to use and requires no special equipment.

This scheme of cipher uses a text string (say, a word) as a key, which is then used for doing a number of shifts on the plaintext.

For example, let’s assume the key is ‘point’. Each alphabet of the key is converted to its respective numeric value: In this case,

Vigenere Cipher was designed by tweaking the standard Caesar cipher to reduce the effectiveness of cryptanalysis on the ciphertext and make a cryptosystem more robust. It is significantly more secure than a regular Caesar Cipher.

In the history, it was regularly used for protecting sensitive political and military information. It was referred to as the unbreakable cipher due to the difficulty it posed to the cryptanalysis.

There are two special cases of Vigenere cipher −

In case of Shift cipher, the entire message could have had a shift between 1 and 25. This is a very small size, and very easy to brute force. However, with each character now having its own individual shift between 1 and 26, the possible keys grow exponentially for the message.

It is another type of cipher where the order of the alphabets in the plaintext is rearranged to create the ciphertext. The actual plaintext alphabets are not replaced.

An example is a ‘simple columnar transposition’ cipher where the plaintext is written horizontally with a certain alphabet width. Then the ciphertext is read vertically as shown.

For example, the plaintext is “golden statue is in eleventh cave” and the secret random key chosen is “five”. We arrange this text horizontally in table with number of column equal to key value. The resulting text is shown below. 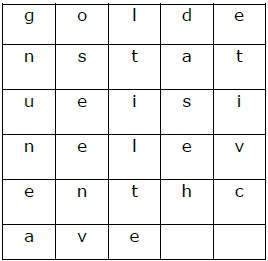 To decrypt, the receiver prepares similar table. The number of columns is equal to key number. The number of rows is obtained by dividing number of total ciphertext alphabets by key value and rounding of the quotient to next integer value.

The receiver then writes the received ciphertext vertically down and from left to right column. To obtain the text, he reads horizontally left to right and from top to bottom row.