Digital signatures are the public-key primitives of message authentication. In the physical world, it is common to use handwritten signatures on handwritten or typed messages. They are used to bind signatory to the message.

Similarly, a digital signature is a technique that binds a person/entity to the digital data. This binding can be independently verified by receiver as well as any third party.

Digital signature is a cryptographic value that is calculated from the data and a secret key known only by the signer.

In real world, the receiver of message needs assurance that the message belongs to the sender and he should not be able to repudiate the origination of that message. This requirement is very crucial in business applications, since likelihood of a dispute over exchanged data is very high.

The following points explain the entire process in detail −

Signing large data through modular exponentiation is computationally expensive and time consuming. The hash of the data is a relatively small digest of the data, hence signing a hash is more efficient than signing the entire data.

Out of all cryptographic primitives, the digital signature using public key cryptography is considered as very important and useful tool to achieve information security.

By adding public-key encryption to digital signature scheme, we can create a cryptosystem that can provide the four essential elements of security namely − Privacy, Authentication, Integrity, and Non-repudiation.

In many digital communications, it is desirable to exchange an encrypted messages than plaintext to achieve confidentiality. In public key encryption scheme, a public (encryption) key of sender is available in open domain, and hence anyone can spoof his identity and send any encrypted message to the receiver.

This makes it essential for users employing PKC for encryption to seek digital signatures along with encrypted data to be assured of message authentication and non-repudiation.

This can archived by combining digital signatures with encryption scheme. Let us briefly discuss how to achieve this requirement. There are two possibilities, sign-then-encrypt and encrypt-then-sign.

However, the crypto system based on sign-then-encrypt can be exploited by receiver to spoof identity of sender and sent that data to third party. Hence, this method is not preferred. The process of encrypt-then-sign is more reliable and widely adopted. This is depicted in the following illustration − 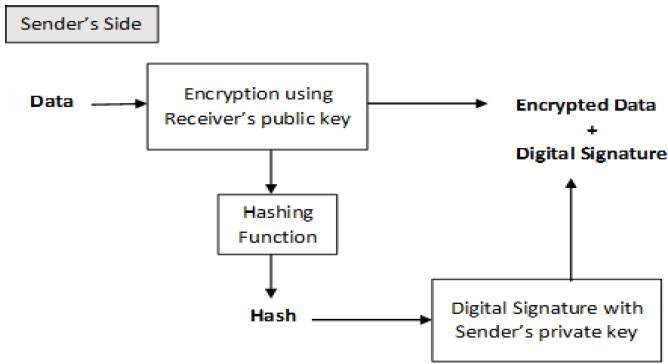 The receiver after receiving the encrypted data and signature on it, first verifies the signature using sender’s public key. After ensuring the validity of the signature, he then retrieves the data through decryption using his private key.