Whenever a message is transmitted, it may get scrambled by noise or data may get corrupted. To avoid this, we use error-detecting codes which are additional data added to a given digital message to help us detect if an error occurred during transmission of the message. A simple example of error-detecting code is parity check.

In error-correcting codes, parity check has a simple way to detect errors along with a sophisticated mechanism to determine the corrupt bit location. Once the corrupt bit is located, its value is reverted (from 0 to 1 or 1 to 0) to get the original message.

How to Detect and Correct Errors?

To detect and correct the errors, additional bits are added to the data bits at the time of transmission.

It is the simplest technique for detecting and correcting errors. The MSB of an 8-bits word is used as the parity bit and the remaining 7 bits are used as data or message bits. The parity of 8-bits transmitted word can be either even parity or odd parity.

Use of Parity Bit

The parity bit can be set to 0 and 1 depending on the type of the parity required. 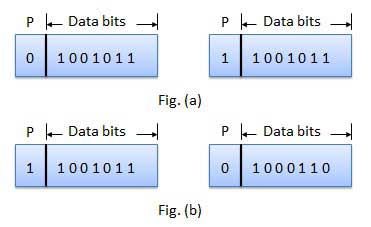 How Does Error Detection Take Place? 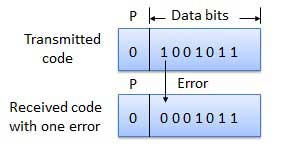