Here the left side of the equation represents the output Y. So we can state equation no. 1

A truth table represents a table having all combinations of inputs and their corresponding result.

The output will be high (1) if A = 1 or BC = 1 or both are 1. The truth table for this equation is shown by Table (a). The number of rows in the truth table is 2n where n is the number of input variables (n=3 for the given equation). Hence there are 23 = 8 possible input combination of inputs. 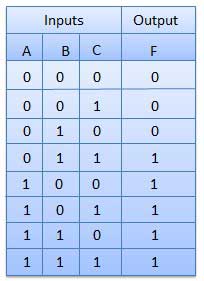 Methods to simplify the boolean function

The methods used for simplifying the Boolean function are as follows −

The Boolean theorems and the De-Morgan's theorems are useful in manipulating the logic expression. We can realize the logical expression using gates. The number of logic gates required for the realization of a logical expression should be reduced to a minimum possible value by K-map method. This method can be done in two different ways, as discussed below.

It is in the form of sum of three terms AB, AC, BC with each individual term is a product of two variables. Say A.B or A.C etc. Therefore such expressions are known as expression in SOP form. The sum and products in SOP form are not the actual additions or multiplications. In fact they are the OR and AND functions. In SOP form, 0 represents a bar and 1 represents an unbar. SOP form is represented by

Given below is an example of SOP. 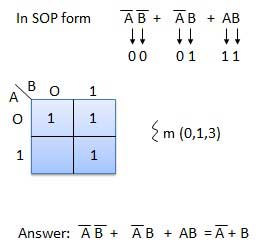 Given below is an example of POS. 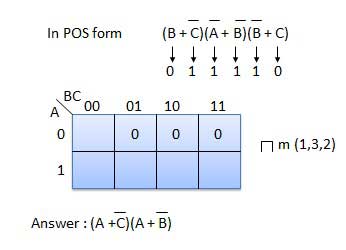 NAND gates can be used to simplify Boolean functions as shown in the example below. 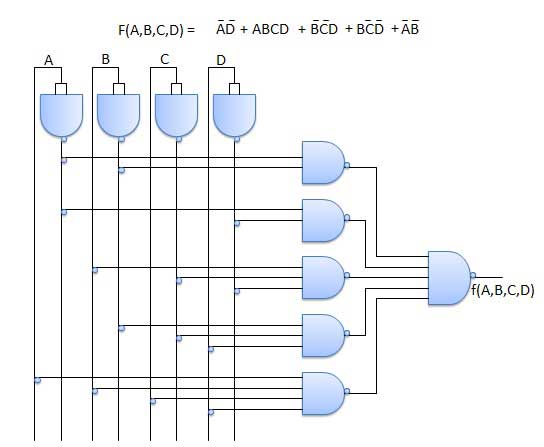