How to Play BMX?

BMX racing is organized on a ground having jumps and the rider who performs all the jumps successfully and reaches the destination is declared as winner. So no tricks are needed to be performed.

However in case of freestyle BMX, the players perform a lot of tricks while riding the bike. The tricks performed in freestyle BMX are as follows −

Some of the air tricks that are performed by the riders in freestyle BMX while being in air are explained below.

Tabletop − In case of this trick, the rider tries to bring the bike to one of his side by turning the handle as well as his body while being in the air. As a result of which the bike looks flat like a table top surface.

Superman − Similar to dirt jumping here in this trick, the rider removes his feet from the pedals and extends them to the outward direction while still holding the handles of the bike, which looks like superman flying in air.

Superman seat grab − It is very much similar to that of superman where the rider takes his one hand off and grab the seat before grabbing back the bars again while landing. 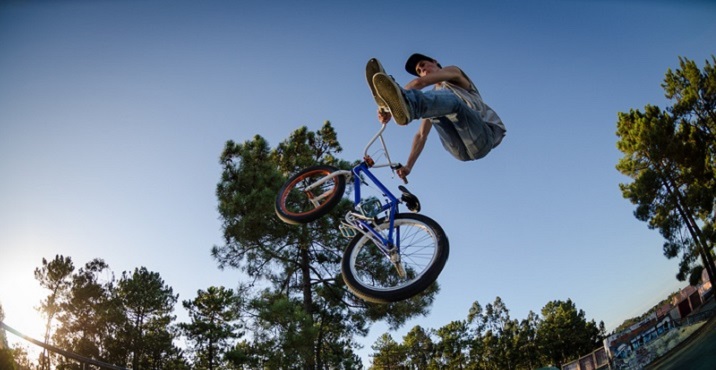 Tail whip − It is a very difficult trick in which a rider throws the bike while still holding the handle bars as a result of which the bike makes a full 360 degree rotation around the steering tube. After the rotation, the biker again stands on the pedals before landing.

Decade − In this type of trick, the rider throws himself around the bike while being in the air. After taking a full rotation from the front part of the bike, the rider again lands himself on the pedals before landing.

Backflip − Here the bikers try to rotate themselves in back direction while being on the bike. As a result of which, the biker as well as his bike take a 360 degree flip in the air before landing.

Front flip − Here the bikers try to flip themselves and make a rotation of 360 degree in the front direction while being in the air before landing again.

Turndown − In this trick, the biker whips the bike to one side and then turns the handle bar towards his legs till the point it reaches its legs and cannot be turned further. Then he again brings the handle back to normal position and lands.

Barspin − In this trick, the biker spins his handle bars to a full rotation while being in air before re-catching them and landing.

Truck driver − It is a combination of flip and barspin where the biker takes a 360 degree turn in the air while spinning the bars one full rotation and catching them again. 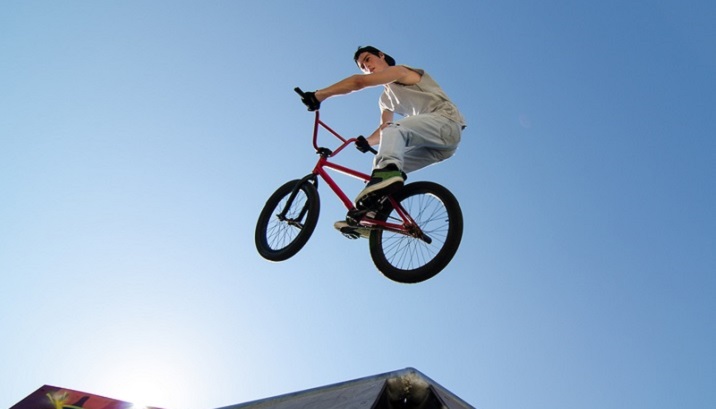 Crank flip − In this trick, while being in air, the player kicks his pedals in backward direction so that the crank arms spin one full rotation after which the player again places his feet on the pedals before landing.

Tuck no hander − Here while being in air, the rider tucks in the handlebar while taking both hands off the handlebar and spreading in air before holding the handles again and landing.

ET − In this trick, while in air, the rider pedals one full crank which makes it look like as though he is pedalling normally.

Wheelie − It is one of the basic flatland tricks where the participant rides the bike supporting only on the back wheels whilst pedalling and the front wheels are raised up in the air.

Endo − Endo is another basic flatland trick where the rider raises the back wheel up in the air and the whole bike is balanced on the front tyre.

Pogo − In case of pogo, the bike’s front wheel is raised in upward direction which looks like a pogo stick while the biker stands on the rear wheel and hops on it to maintain balance.

Manual − In this trick the rider rides the bike while raising the front wheel up in the air but no pedalling is involved here. In order to get the momentum for performing the trick, riders first ride the bike with great speed and then perform the trick.

Nose Manual − It is very much similar to the manual trick. The only difference is that instead of the front wheel, the back wheel is raised in the air whereas the whole support is on the front wheel.

Bunny hop − Here the rider jumps his bike into the air from flat ground while both wheels are in the air. This trick can be achieved by first popping up and while in air, the rider need to pull the bike using his handlebars and then in air he need to again rebalance it using his feet on the pedals.

Dork Manual − Here the biker needs to stand on one peg of the rear wheel using one foot while other foot in air and perform a manual on the bike while still keeping one foot on the peg and controlling balance.

Hang-5 − Here the biker performs a nose manual while keeping one of his legs on the front peg other leg dangles around mostly for controlling balance.

Steamroller − This is one of the most stylish and difficult trick to perform. In this trick, first the rider stands on the front peg while moving the bike to front using his other foot and hands and then balances on one wheel while holding the body of the bike in one hand and moving at front. 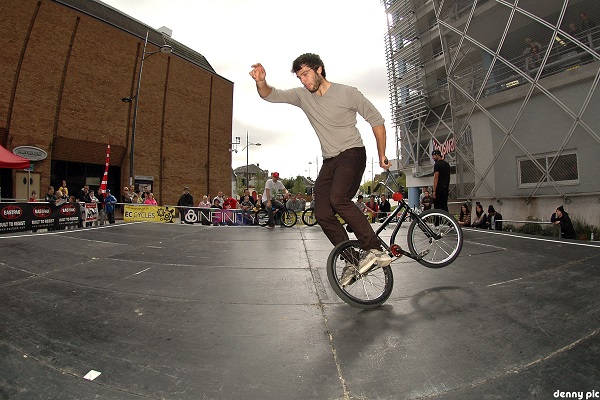 Footjam Tailwhip − In this trick, the rider jams the leg and kick the bike from the tail to roll 360 degree using one of his legs. After the completion of 360 degrees the rider again has to put his feet on the pedals.