Data is serialized for two objectives −

Java provides a mechanism, called object serialization where an object can be represented as a sequence of bytes that includes the object's data as well as information about the object's type and the types of data stored in the object.

After a serialized object is written into a file, it can be read from the file and deserialized. That is, the type information and bytes that represent the object and its data can be used to recreate the object in memory.

ObjectInputStream and ObjectOutputStream classes are used to serialize and deserialize an object respectively in Java.

Generally in distributed systems like Hadoop, the concept of serialization is used for Interprocess Communication and Persistent Storage.

Persistent Storage is a digital storage facility that does not lose its data with the loss of power supply. Files, folders, databases are the examples of persistent storage.

This is the interface in Hadoop which provides methods for serialization and deserialization. The following table describes the methods −

In addition to these classes, Hadoop supports a number of wrapper classes that implement WritableComparable interface. Each class wraps a Java primitive type. The class hierarchy of Hadoop serialization is given below − 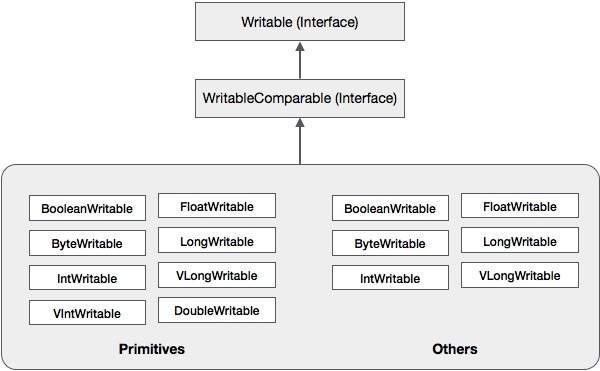 This class implements Writable, Comparable, and WritableComparable interfaces. It wraps an integer data type in it. This class provides methods used to serialize and deserialize integer type of data.

Serializing the Data in Hadoop

The procedure to serialize the integer type of data is discussed below.

Deserializing the Data in Hadoop

Advantage of Hadoop over Java Serialization

Hadoop’s Writable-based serialization is capable of reducing the object-creation overhead by reusing the Writable objects, which is not possible with the Java’s native serialization framework.

To serialize Hadoop data, there are two ways −

The main drawback of these two mechanisms is that Writables and SequenceFiles have only a Java API and they cannot be written or read in any other language.

Therefore any of the files created in Hadoop with above two mechanisms cannot be read by any other third language, which makes Hadoop as a limited box. To address this drawback, Doug Cutting created Avro, which is a language independent data structure.